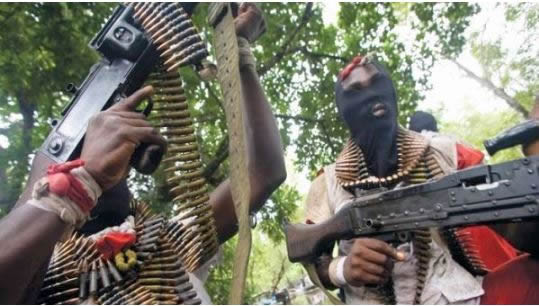 Rampaging gunmen in Erho Abraka community in Delta State, on Sunday allegedly abducted three people on their way from Eku community to Abraka in the early hours day.

It was gathered that the victims were abducted around Erho Abraka area after they allegedly fired gun shots into the air with a view to creating fear in them before they were rounded up and forced into a waiting vehicle that zoomed into an unknown destination.

But the police commissioner in the state , Anthony Agbizi who confirmed the incident to newsmen in Asaba said the abductors came in Toyota Camry that conveyed the victims ( two girls & a boy) to an unknown destination adding that though the names of the victims were still not known, the police had intensified search for the victims.

Eyewitness, Patience Agbarho said the suspected kidnappers had last week attempted a farmer who was on his way to his house, but that the police came to his rescue and the suspects fled, adding that Erho Abraka community is currently under seige by Kidnapping activities.

Meanwhile, the police commissioner, Anthony Agbizi has confirmed that the police in Abraka police division in the early hours of Monday arrested two suspects in Eku community in connection with the abduction of the three people.

CP Anthony Agbizi said that the suspects: Victor Andy and Lucky Agboro upon interrogation confessed to the crime, adding that they were part of the kidnappers of the three people, adding that investigation was ongoing while efforts were on to release the victims unhurt. The police boss, however, called on members of the public to always provide the police with useful information that will help the police at all times, warning that It will not be business as usual for all forms of criminal activities in the state.

He said, “the police have taken over the community with a view to arresting those perpetrators and bringing them to book, including those suspected hoodlums and cultists.”