More Nigerian villages have benefited from the 10,000 African Villages Project, an initiative of the Chinese Government to provide digital TV access to rural communities across Africa.

This was revealed during the launching ceremony of the project in Kpaduma Village, a suburb of the Federal Capital Territory.

Speaking to journalists, the Chief Executive Officer, StarTimes Nigeria, Justin Zhang noted that StarTimes was contracted by the Chinese Government to deliver on the project across Africa, adding that no fewer than 1,000 villages in Nigeria have benefited from the project, an initiative which could help meet the ITU’s demand for African countries to achieve digital migration of TV industry before the year 2020. 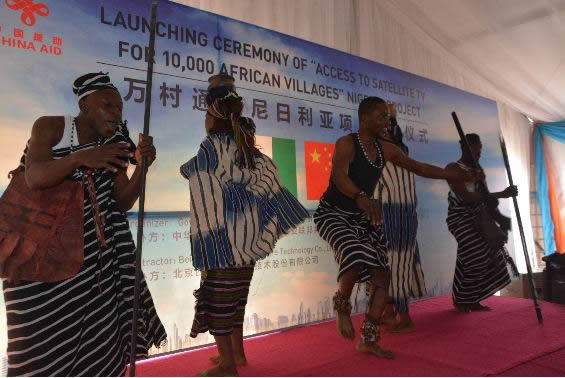 According to him, “We have entered an advanced stage in the installation of satellite TV access to 1,000 Villages in Nigeria. The villages identified for this project will receive 2 solar power projector TVs for the community, digital TV sets, 20 Satellite dish and decoders where they can watch more than 100 international and local channels all free of charge, just as we have done in Kpaduma village”

Also commenting, the Minister of Information and Culture, Alhaji Lai Mohammed commended the Chinese Government’s initiative towards fostering a better China-Africa partnership. He noted that the project would be an eye-opener to the villagers, many of whom prior to now have not had access to satellite TV or an opportunity to see the world beyond.

The Chinese Ambassador to Nigeria, Zhou Pingjian expressed China’s willingness to continue to bring projects that will better the lot of Nigerians and Africans at large, assuring that that the friendship between China and Nigeria will be preserved via infrastructural projects that will uplift the people of the local communities who need it the most.

On December 4th, 2015, Chinese President Xi Jinping announced at the Johannesburg Summit of the Forum on China-Africa Cooperation that China would implement satellite TV programs for 10 thousand African villages. The project, known as “Access to Satellite TV for 10,000 African Villages”, is part of China- Africa cooperation programs and is aimed at enabling African families in rural areas to have access to the digital signal with high-quality images and rich TV programs.