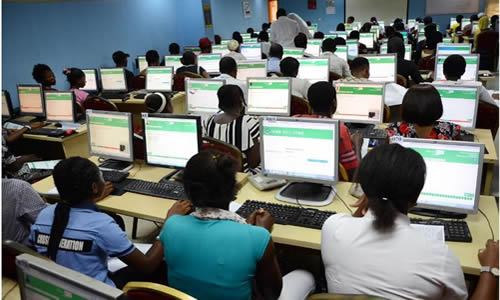 The Joint Admissions and Matriculation Board (JAMB) has said that it registered 869,709 candidates for the 2019 Unified Tertiary Matriculation Examination (UTME), which is scheduled to hold in March.

JAMB stated this in its weekly bulletin from the office of the Registrar, Prof. Is-haq Oloyede, on Monday.

The board also revealed that it has suspended nine Computer-Based Test centres, that breached the code governing the 2019 registration exercise.

JAMB noted that some of the centres demanded higher fees than the amounts stipulated by the Federal Government.

“Before commencing the 2019 UTME and Direct Entry registration exercise, a meeting with all CBT operators was convened in Lagos State, where the guidelines on the exercise were deliberated upon and laid out strictly for all to adhere to. The meeting had resolved that the cost of registration should not exceed N700.

“Unfortunately, findings from the board’s monitoring exercise revealed that some centres were charging higher than the stipulated figure directed by the Federal Government and equally agreed at during the Lagos meeting,” the bulletin read.

The board added that 10 centres in Lagos and Plateau states were under investigation for the same offences.